We often see requests for multiple memory configurations ranging from 2-12 DIMMs per socket. Some of our customers would like to have 128/256/512/1024GB of RAM for the latest generation of Intel Xeon Scalable processors (Skylake and Cascade Lake). The Xeon Scalable processors support six memory channels and up to DDR4-2933 DIMMs. To take advantage of all memory channels, we would need to use 96/192/384/768/1536GB of RAM.

If instead we were to populate at 256GB of memory on a dual socket system via 8x 32GB DIMMs, we would only be using 4 of 6 memory channels/socket. This configuration will still work, but memory bandwidth performance will suffer. To find out by how much, we ran a simple memory benchmark, STREAM, in multiple memory configurations on a couple of motherboards and present our findings.

I used the slightly modified version of STREAM from NERSC’s trinity benchmarks. No other changes were made to the source. CentOS 7 was installed with default configuration. From there the benchmark was compiled via:

Where NTIMES is the number of times to run each test and N is the array size (there are 3 arrays, this would set each array size at ~600MB, well above the L3 cache size).

Total DIMM count was modified from 4 DIMMs (2/socket) to 8, and 12. Benchmarks were run via: 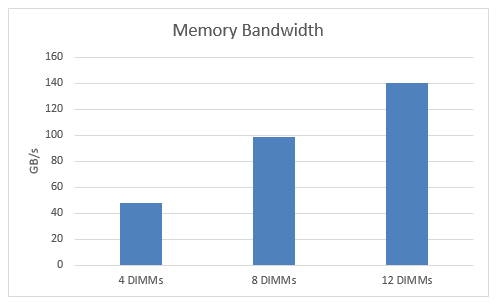 From the results we can see that not populating all memory channels can result in up to a ~65% memory bandwidth loss.

We strongly recommend customers to fully populate all 6 memory channels to get the best performance out of their system. With falling memory prices (already down ~50% from last year) adding additional DIMMs will hopefully be within the budget for your servers. I’ll be running another test soon to show how real application performance is affected by memory population and will be posting the results on our website.

If you’d like to discuss configuring your next Xeon Scalable server for optimal memory performance, please reach out to me at adam.jundt@advancedhpc.com.