NVIDIA pioneered GPU computing with the invention of its CUDA® programming model and the creation of a global ecosystem of developers. Even before the creation of CUDA, NVIDIA was a pioneer in the development of innovative algorithms and applications to bring GPU Computing to the world. Fast forward to present day, NVIDA GPUs power a plethora of workstations and supercomputers around the world, accelerating computationally-intensive tasks for scientists, researchers, system administrators and anyone in charge of enterprise data management.

Advanced HPC has the full complement of Tesla GPU platforms to meet each and every of your data center and enterprise GPU computing needs; featuring:

NVIDIA® Tesla® V100 is the most advanced data center GPU ever built to accelerate AI, HPC, and graphics. Powered by NVIDIA Volta architecture, and available in 16GB and 32GB configurations, Tesla® V100 offers the performance of up to 100 CPUs in a single GPU. Data scientists, researchers, and engineers can now spend less time optimizing memory usage and more time designing the next AI breakthrough.

With 640 Tensor Cores, Tesla V100 is the world’s first GPU to break the 100 teraFLOPS (TFLOPS) barrier of deep learning performance. The next generation of NVIDIA NVLink™ connects multiple V100 GPUs at up to 300 GB/s to create the world’s most powerful computing servers –delivering 47X higher inference performance than a traditional CPU server. AI models that would consume weeks of computing resources on previous systems can now be trained in a few days.

Tesla V100 is engineered for the convergence of AI and HPC. It offers a platform for HPC systems to excel at both computational science for scientific simulation and data science for finding insights in data. By pairing NVIDIA CUDA® cores and Tensor Cores within a unified architecture, a single server with Tesla V100 GPUs can replace hundreds of commodity CPU-only servers for both traditional HPC and AI workloads.

For a closer look at why the Tesla V100 is an ideal fit for today’s data centers, please click on the following PDF entitled, “Three Reasons to Deploy NVIDIA Tesla V100 in Your Data Center.” 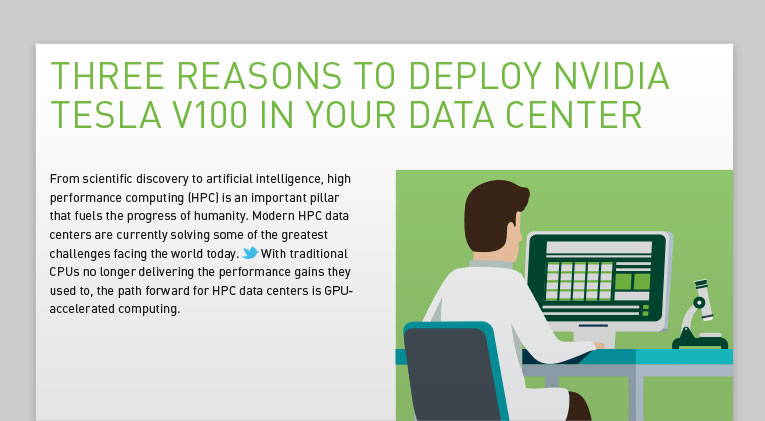 One of the distinguishing assets of the Tesla P100 is its complementary relationship with NVIDIA’s NVLink™ high-speed bidirectional interconnect. A server node with NVLink can interconnect up to eight Tesla P100s at 5X the bandwidth of PCIe. This further fortifies the Tesla P100’s capacity to address the continually burgeoning compute challenges in HPC and deep learning.

With over 550 HPC applications accelerated—including 15 out of top 15—as well as all deep learning frameworks, every HPC customer can deploy accelerators in their data centers.

NVIDIA® Tesla® P4 and P40 GPU deliver immense gains in efficiency and speed to accelerate inferencing production workloads for artificial intelligence and deep learning services. In fact, The Tesla P4 and P40 are specifically designed for inferencing, which uses trained deep neural networks to recognize speech, images or text in response to queries from users and devices. 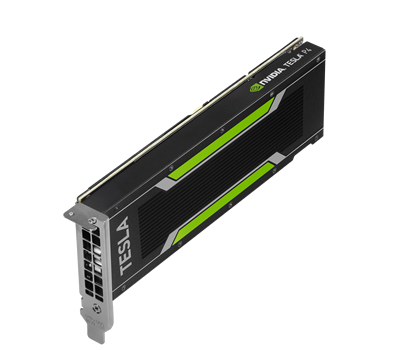 The Tesla P4 accelerates any scale-out server, offering a remarkable 60X higher energy efficiency compared to CPUs. With its density-optimized small form factor and a 50/75 W power footprint design, the Tesla P4 can easily fit into any server. However, the efficient size does not limit its performance. The Tesla P4 delivers 22 TOPs of inference performance with INT8 operations to slash latency by 15X. Plus, Tesla P4 can transcode and infer up to 39 HD video streams in real-time, powered by a dedicated hardware-accelerated decode engine that works in parallel with the GPU doing inference. 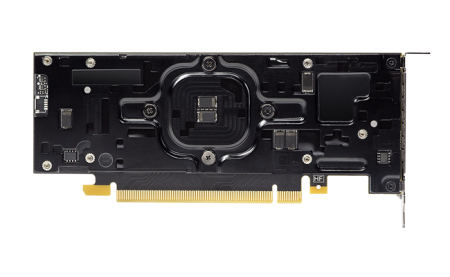 As a testament to its versatility and performance, the Tesla P4 is the workhorse GPU at the heart of our newly launched Orion server, the world’s first GPU-accelerated storage appliance. Orion utilizes the GPU to make up to 100 storage devices act as a single, high-performance block device with enterprise grade data integrity and resilience.
Another inferencing powerhouse, the Tesla P40 delivers maximum throughput for deep learning workloads. With 47 TOPS (Tera-Operations Per Second) of inference performance and INT8 operations per GPU, a single server with 8 Tesla P40s delivers the performance of over 140 CPU servers. Additionally, the Tesla P40 produces over 30X lower latency than a CPU for real-time responsiveness in even the most complex models. 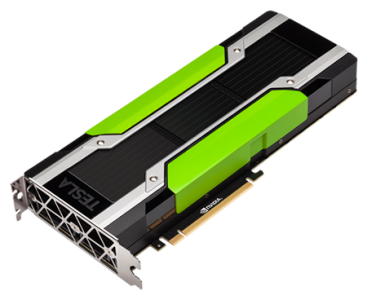 In the broader view, with the Tesla P100, Tesla P4 and Tesla P40, NVIDIA offers the only end-to-end deep learning platform purpose built for the data center. All of these GPU platforms are readily available from Advanced HPC. Better still, our deep engineering bench has the expertise and experience you need to make the most informed decisions to ensure the success of your AI and deep learning endeavors . . . in the data center and beyond.

NVIDIA Volta is the new driving force behind artificial intelligence. Volta will fuel breakthroughs in every industry. It pairs NVIDIA CUDA® and Tensor Cores to deliver the performance of an AI supercomputer in a GPU. Humanity’s moonshots like eradicating cancer, intelligent customer experiences, and self-driving vehicles are within reach of this next era of AI. With over 21 billion transistors, Volta is the most powerful GPU architecture the world has ever seen.

The revolutionary NVIDIA Pascal™ architecture is purpose-built to be the engine of computers that learn, see, and simulate our world—a world with an infinite appetite for computing. From silicon to software, Pascal is crafted with innovation at every level. With 150 billion transistors built on bleeding-edge 16 nanometer FinFET fabrication technology, the Pascal GPU is the world’s largest FinFET chip ever built. It transforms a computer into a supercomputer that delivers unprecedented performance, including over 5 TeraFLOPS of double precision performance for HPC workloads.

For a convenient side-by-side comparison of the NVIDIA Tesla data center products, please review the Tesla Platform Line Card below 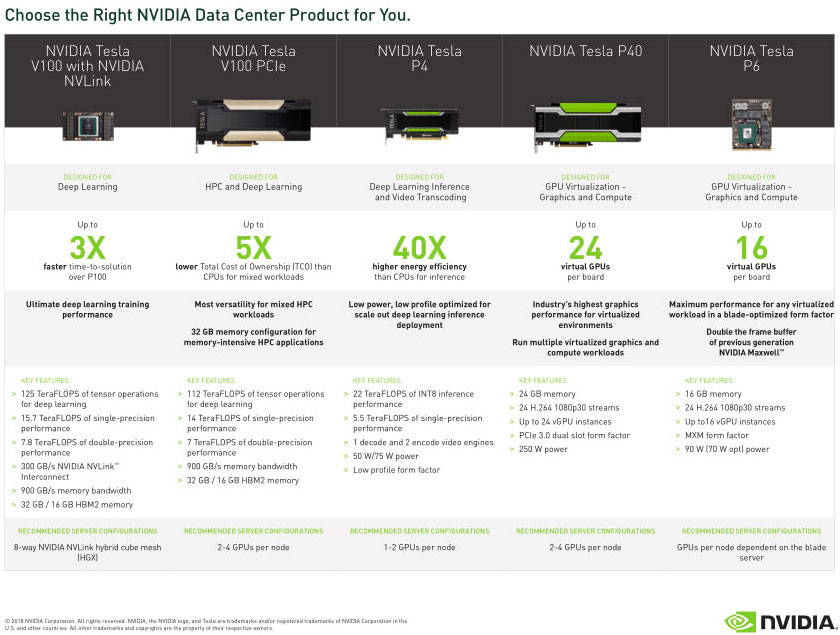 Accelerated Computing and The Democratization of Supercomputing

Accelerated computing is revolutionizing the economics of the data center. HPC enterprise and hyperscale customers deploy accelerated servers because GPUs deliver unprecedented cost savings for their data center. To learn how accelerators like the NVIDIA® Tesla® P100 can lower data center cost by up to 50%, review this whitepaper: Accelerated Computing and the Democratization of Supercomputing. It is housed in our whitepaper section. 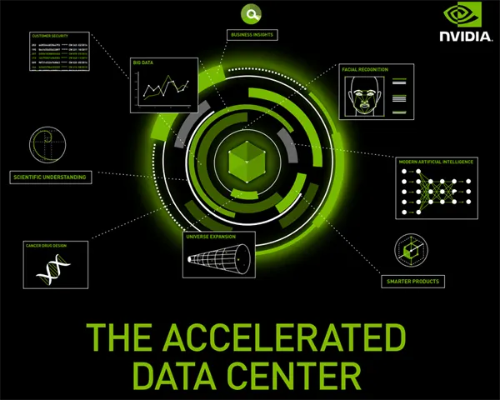